So – about 3 years ago i seen this most awesome piece of furniture at a local boutique here in Utah.  I took pics at the time, but ive switched phones a couple times since then and the pics are gone.  It had the most awesome painting technique done too it.  It looked like layers and layers of old paint, but it wasnt.  You could tell that the paint had been layered on using some type of product with some kind of tool – the finish was really textured and had tons of colors in it.  And what i loved about the finish, was that it had lots of “lines” in the paint, it wasnt just painted on and then sanded off, the “lines” really made the piece look awesome.

So you got that visual in your head!?!  I know, i know….i would love to be able to find a pic to show ya what i mean….

Anyways, ive had this old pine dresser for a while now and have always wanted to do something different to it.  The entire dresser had a rough hewn finish, so it was already very rustic. I was at a clients house a few weeks ago and was reminded of this awesome paint finish because she had the coolest dresser with something kind of similar to what i had seen years ago – that inspired me to get out my dresser and start experimenting with it :)

So, i started playing around with a metal putty knife and some paint to start adding layers of paint to the dresser.  But, that didnt work out.  The paint was just too thin and didnt really go anywhere, because the dresser was so textured, the paint just sat in a glob and just kinda smeared.

After trying that for a bit, i decided that my paint needed a little substance if this idea was going to work.  So i took some spackling paste and mixed it with some paint (about 4 parts paste to 1 part paint) – just mix it really good until the paste is the same color as your paint and there are no more lumps. 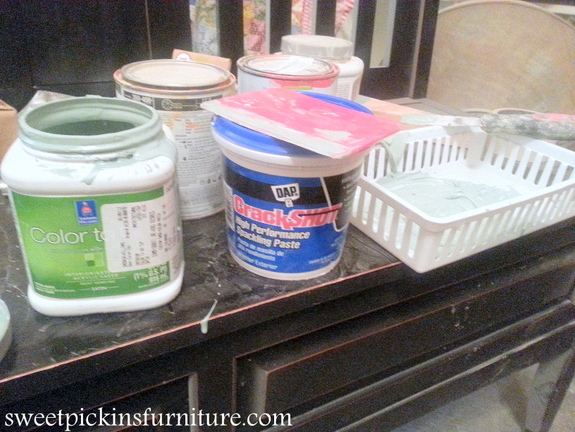 I found the best method to trowel on the paint was a cheap plastic putty knife that had some give in it.  The metal one was too stiff.  Also the bigger the putty knife, the more surface you could cover – and i think that covering more surface would look best rather than having tiny little paint splotches everywhere.

After i mixed up my 1st color, i just started my grabbing some paint/spackling paste on my putty knife and just kind of randomly smeared it on the dresser.  I wasnt careful at all – just put it here and there, wherever.  And i didnt smooth out the paste, i was going for really textured.

See the lines?  Thats what i was going for, thats how the other piece was that i saw years ago and what i really liked about it – and the putty knife was perfect for getting that look. After my 1st color was done, i mixed up a second and then a 3rd and just kept piling on the paste. In the end i decided to stop at 3 colors – blue, green and white.  But, i did have yellow on my paint brush from that table you can see in the above pic and decided just to brush on a little here and there.

Ready for this scary pic!!!  So at this point i was ready to give up!  It looked beyond crapola.  I hated it and it was clearly NOT the look i was going for!!  It looked like a drunk cheetah puked up skittles on it or something – yuck. 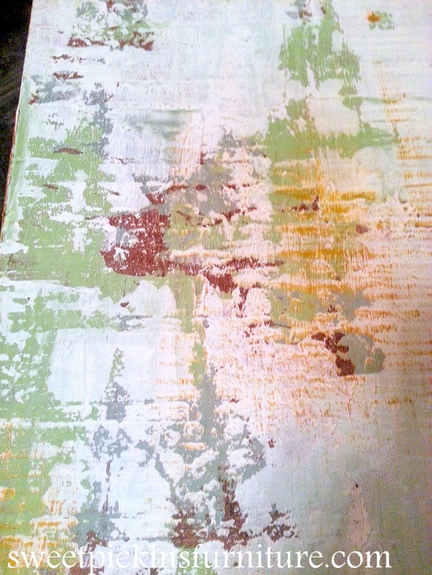 BUT, i decided to keep going and took my orbital sander to it and see what would happen with the paint toned down a bit (wait until the paste/paint has fully dried before sanding, about 2 hours i think).

That did the trick and after that i really liked it.  If you follow me on Facebook, you know that i posted this pic of my new painting technique and was excited to show you guys :)  At this point i was ok for the most part and was ready to keep sanding. After sanding for a bit to tone down the whole look i was happy with the final outcome.  I really think the rough hewn wood played a big part in getting this finish because the wood already had lines in it that the paste/paint was able to get into.  I am excited to try out this technique on a regular flat surface and see how it goes.

I kept going back and forth to take off more paint or to leave it.  In real life the look is a lot more subtle than it looks in pictures – in person it doesnt look so contrasting and has a much softer look to it.  I was also considering glazing it to tone it down even more but i didnt on this one.  In the end i just sealed it with tung oil.  I also think leaving the drawers just natural it helped it not be so overwhelming. 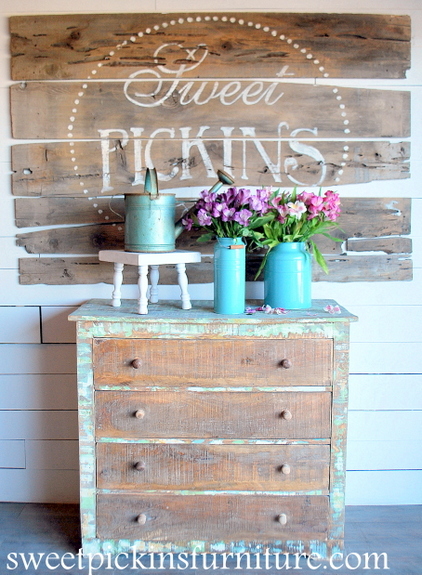 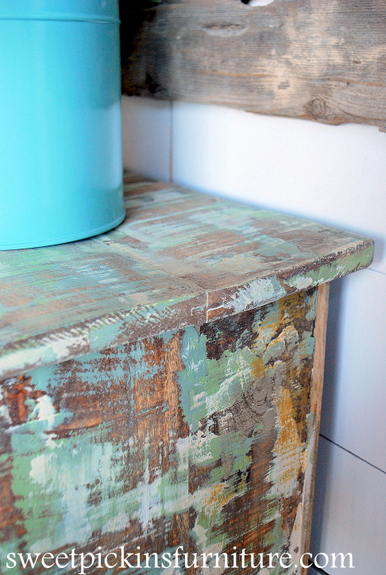 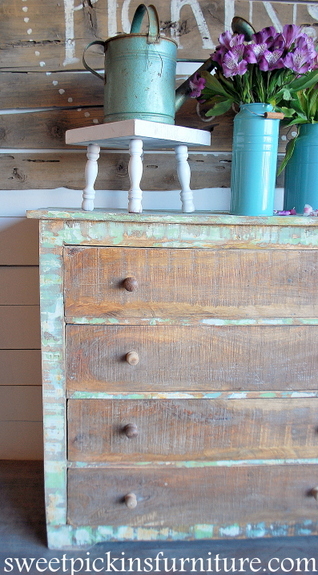 In the end i am really happy with how it turned out and it went to a good home.  This was a fun technique to try and will most definitely being playing around with it more in the future!  I think there are a lot of possibilities here!